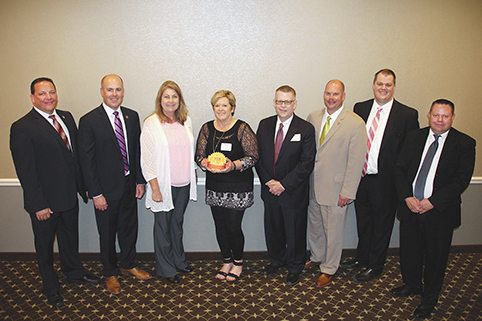 A Webster City business was recently honored for its partnership with Fareway Stores Inc.

Webster City Custom Meats Inc. was named the Supplier of the Year by Fareway at an Iowa Grocers Association luncheon in Johnston.

Connie Ingraham, president and chief executive officer of Webster City Custom Meats, and Phil Voge, vice president, attended the luncheon on June 2 along with Diane Knudsen, sales. All three said they were very surprised when the award was announced.

“I think they see that in us and we try to partner with them as true partners,” she said.

Both Voge and Ingraham were quick to credit their employees for their dedication and hard work.

“It takes all those people behind the scenes to make everything happen and click together,” Ingraham said.

“From a production stand point, it’s refreshing to have someone reward you for all the hard work you’ve done,” Chip Abbott, chief operations officer, said.

Voge sent a letter detailing the award to all of the employees. He said the company would host a celebration with employees in the near future.

Click here to view the article as it originally appeared in the Daily Freeman-Journal.